The 2018 snow season has been very good to us but unfortunately with spring being full steam ahead it's time to wrap it up. Last year was the best season since bomber of 2004 and although most of Australia is in drought this year topped 2017 a bit further. It started with a solid dump mid-June which laid the foundation for a combination of cold nights and barely any rain events to make it an awesome shred fest.

The last two winters were well above average as you can see in the chart. They were basically so good that you could almost believe the old myth that it snows more in the Australian Alps than in Switzerland.

But does it? Does more snow fall in the Australian Alps than in Switzerland?

And where is this idea coming from? The origin of this myth seems to be this sentence:

It can be found in the 1957 documentary "Roof of Australia" which was shot right in the middle of the construction of the Snowy Mountains scheme (see below). You'll see a lot of NSW footage as well as a bit from the Victorian High Country.  It's fun to watch so have a look later.

Now let's do a myth-busters on this claim. First of all we need to define snowfields. Obviously it's a field with snow on it but how big is it and where is it?
That's what I will use here. If you're a Victorian back-country lover, you hopefully won't disagree that snow most of the times starts above Camp Creek Gap. That's at 1100m so let's just use this for Australia. Yes it often snows down to 500m once a year however the snow barely stays there for long. On the other hand you quite often need to walk before hitting the snow-line but let me stick with this value. It only goes in Australia's favour.

Which value do we use for Switzerland? If you image-search "Zurich Winter", you'll find heaps of images of a sugar-coated city. Yes it does snow there every winter and personally I've stumbled out of a Zurich club in winter just to fall over 1m of fresh powder. The average annual snow-fall is 85cm and there are 53.3 days with a closed snow cover ... but let's be a little bit conservative and use a higher elevation than the 400m of Zurich. 800m seems fair, right? 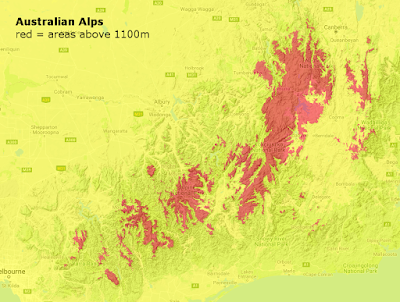 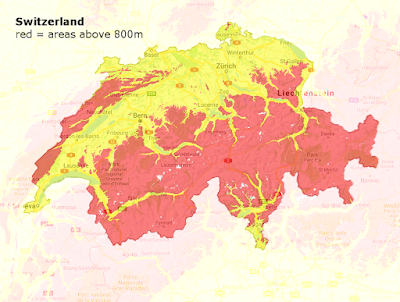 Oooops. Yeah I think you don't need to be a rocket-surgeon to realise the Swiss red is bigger than the Australian one. At the same scale the area is already much bigger so we don't need to go into the average accumulated snow fall per year because this would be very sad. E.g. Hotham (1800m) vs. Arosa (1840m) makes me cry ... it's 356cm vs. 840cm 😭 Therefore I'm calling this

Ok. Some of you might want to argue it's about skiable snowfields. Watch some of Candide Thovex' videos and then we'll have another chat.

Cheers and enjoy summer in the High Country ... or winter in the North!
Philipp


P.S.: Here's the above mentioned Roof of Australia documentary. For more old-school gems visit the National Film and Sound Archive of Australia or check out the Old School Skiing video of the National Alpine Museum. It's quite entertaining.