Last year Anna and I climbed a mountain and I started writing a post only to put it into the proverbial freeze-drawer of every blog: The draft folder. Now before this post gets serious freezer burn, it's time to thaw it up, add some spice and dish it up. Here we go:


Ama Dablam (6812m) is known as one of the most impressive mountains in the world, not for it's altitude, but for it's beauty, aesthetics and the pure exposure encountered high on it's flanks. The mountain has gained in popularity over the past years with post-monsoon 2016 being the busiest season hosting over 400 registered climbers. It's common to encounter high altitude Everest veterans having problems with the technical difficulties encountered on the crux pitches of this climb.

Let's get off this mountain. It's four o'clock, we got about an hour of daylight left and we got a lot of abseiling to do.

Five minutes later I dropped my ATC. This was going to be an interesting night. 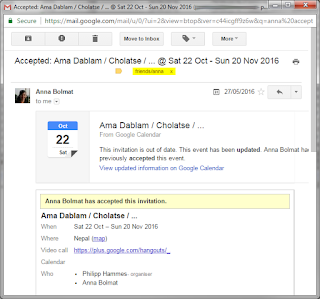 Now how did we get ourselves into this mess? It all started somewhere in May 2016 when we stumbled upon the a blog-post by Brendan Leonard: F*&# Busy. It's one of those motivational posts or videos you always find on the web but normally choose to ignore. We're doing our daily, weekly monthly and annual routine and push dreams out to someday. Not this time. Somehow this post resonated with me, so I got the calendar out and put a date in it. A date with Anna in Nepal. November 2016. After kicking up a bit of stink about a tentative response, Anna changed it to "Accepted" and things were ready to roll.
"Find a partner for this adventure, someone who does not drift into “Flake Mode,” ever. Commit. Tell your boss about it and confirm that you will not be in the office those days."
Ok. Tick. Now where do you start organising an high-altitude expedition? What's the hardest part? It's very simple: Buying the fucking ticket is the hardest part because then you're committed. And everything else can be organised online. A lot of website like the one of Alan Arnette or Tim Mosedale provide great insight and checklists. It's all about wanting to do it which means you'll find a way to make it work instead of finding an excuse.
Yes a certain degree of experience helps in mountaineering but let's be honest. Once you stumbled down the rabbit hole of ice and snow upon big hills, you're always looking for the next goal, the next stretched target that suits your abilities and brings you one step closer to that big mountain you always had in mind. On a side-note ours was Cho Oyu however we're currently looking forward to a far bigger adventure than tall mountains.
Right, I already blamed Brendan for getting us into this mess so let's not stop there and blame Andrew Lock for dragging us deeper into it as well. If you book yourself into an expedition there are various packages you can choose from. They range from the very basic one - "here's your permit, there's emergency gear, have fun, off you go." - up to the full scale 1:1 guided and fully catered premium package. We actually went for the "special edition Sparta package" not because we couldn't afford it but because of something Andrew said:
"There's a huge difference between climbing a mountain self-guided and fully guided. You do climb the same mountain but it's much harder doing it on your own."
The idea was to step away a bit more from organised expeditions and do our own thing with the optional safety backup of a commercial company in case things go pear-shaped. On the plus-side going self-guided means you have the flexibility to adjust your plan every day, every hour and every minute to your needs. And finally the biggest advantage is you're staying on your own. In an environment where a simple cold can end your climb for good, you want to reduce the amount of human interaction as much as possible. Once one in the team gets sick, everyone catches it.
There we were Anna and I as well as our little mascots Flopsy and Beanie hopping off the Dodgy Inc. plane at Lukla and jumping into the middle of the Khumbu valley. Ahhhhhh it feels sooooo goooood to be back in the mountains. It's like coming home. I know that this sounds weird because quite the opposite of a warm and cozy house with a lit fireplace lies ahead of you. We were facing exhaustion, headaches, bitter cold, gross food and long days but then there are all the great things like stunning panoramas, heart-warming locals, exposed ridgelines and the sense of achievement.

"It's a mountaineer's thing. You won't understand."

What is that? 😲 WTF?!? Is that a full scale espresso machine in a tea house next to the Tengboche monastery? Seriously? Not only did a porter haul that thing all the way up here but there is also a full coffee shop set of illy-branded cups and saucers which aren't exactly light either. There you go - the valley is so much littered with western conveniences like wifi, 3G, pancakes for breakfast or ice cold beer that you almost don't want to take that right turn up towards the endurances of Basecamp. But then again we're mountaineers. Wir sind ja nicht zum Spaß hier!
For now we had very comfortable days of hiking ahead of us; slowly ascending to Basecamp at 4500m without stuffing up our acclimatisation. The valley, which is the main tourist spot of Nepal, has changed a lot. Although I'm a first timer, I'm not new to the travelling developing countries. Fresh paint and new buildings all around were evidence of an rebuilding effort after the Gorkha Earthquake in 2015. It's the little things which make you stop and think

Right. That's all nice and well but when does he stop babbling and tells us the story of of the actual climb? I hear you however I won't bore you with too many details. Yes we climbed the mountain but it was much harder than expected. Fairy Castle ideas of hopping over Amphu Laptsa after this climb were soon shattered on the treacherous slopes up to Advanced Basecamp (ABC). Rest days snuck into the schedule and slowly the comprehension made its way into our minds that this is going to be tough. Really tough. Much tougher than expected. A true stretched target. Fortunately for us there are two things Anna and I had on our side: Persistence and perseverance. We've come this far and the weather is great so there's no way we're turning back now. I'm not sugar-coating this: Doing the carries all the way up to Camp 2 and climbing up the dubbed crux of the climb - the Yellow Tower - took their toll. We were wrecked at times and that was even before the summit push.

Speaking of the devil. If you've read anything about Ama Dablam then everyone's telling you how the Yellow Tower is the hardest / most difficult part? Yeah nah mate, it's not. It's hard but it's not the hardest part. On that note: If you're the Melbournian climber who told Anna that the climb between C2 and C3 is a "piece of piss", make sure you never run into her. Never ever. Just a heads up for you mate in order to avoid a kick in the balls and a vicious punch in the face from her.

"Looking back at the pictures, I'm wondering what took us so long on summit day."

We took a bit longer. So long it is actually quite embarrassing. No I don't want to talk about it. Moving on. After getting to the summit, taking a couple of pics and calling mum (3G!), Anna and I started abseiling down the fixed lines on a back-up device while the daylight faded, the temperatures dropped and the wind picked up. Lovely. My memory of the descend is actually a bit more vivid than going up a couple of hours earlier probably because there were some entertaining scenes:
You're probably still wondering what happened after my shiny green ATC tumbled down the face of the mountain. Have you ever heard of the 7Ps? It goes like this "Proper Planning and Preparation Prevents Piss Poor Performance". Of course in the lead-up I counted on losing this piece of equipment so I had a back-up figure of eight. I even considered that Anna will drop her ATC as well - which she did - so there was another figure of eight 😂

Ad now you think the story ends there? Oh no you're sadly mistaken: We were so trashed that we called it a day at Camp 2.7 and chose a frosty bivy over a sketchy ridge traverse above the Grey Tower in the dark ... and yes our sleeping bags were at Camp 2 and no we didn't have any water left. It was cold, very very very cold. Funny enough looking back, I think it wasn't that bad because worse things were about to come. You know how looking back some bad experiences don't seem to be that traumatising because they are overshadowed by something far worse? Like hitting your toe against the corner of the bed but then stumbling and breaking your leg. Yes there occurred something Anna now refers to as "The Death-March". Feel free to ask her about that because it provokes a 100% guaranteed grunt.

If this little read made you taste blood and you're considering this to be right up your alleyway, make sure you keep the 7Ps in mind go with a good company even if you only need them as a emergency backup. Our recommendation is hands-down Himalayan Ascent / Expedition Base. We met Lakpa on the mountain and can attest to him running a smooth operation and a pretty organised show.

In the meantime join our local facebook group - Mountaineering Melbourne - and ask any questions there or in the comments below.

Cheers and see you in the Mountains ❄
Philipp 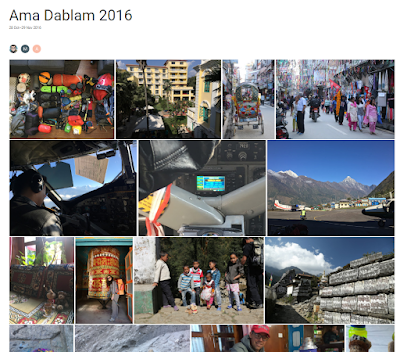